Thank you for this opportunity to present myself as a candidate for Empress XXVI of the Imperial Court of New York.  For much of the last fifteen years I have watched Emperors and Empresses alike rise to the challenge of the monarchy, serve our community with grace, goodwill and a sense of humor, and would deeply appreciate the honor of your consideration to join their ranks.

Becoming Empress of the Imperial Court of New York would allow me to draw on two decades of gay activism, my professional life as a fundraiser and teacher, my history with organizations from a broad array of communities and continue building on the tremendous outreach and excitement to the Imperial Court of New York. I want to roll my sleeves up and work with the ICNY family to build on the amazing energy of our new members, the passions of our hard-working and dedicated corps, and re-engage less active members in a way that provides opportunities for everyone to give as much as they want to the work that we do.

1997
In 1997, I was appearing in a production of La Cage aux Folles with (then) Princess Royale Victoria Weston.  My earliest interactions with the court involved coordinating a group ticket sale with (then) Princess Royale Panzi.  The night the ICNY attended that event was shortly after the beginning of Reign 11, and I can still see Empress Gianna sitting in the front row of the theatre.  I had heard of Night of a Thousand Gowns, and the Imperial Court of New York while performing at events for the Gay Activists Alliance of Morris County (NJ), but had not yet seen them in action.  I was twenty-three, and blown away by the grace, style and elegance of the Courtiers in Rahway, NJ.  I was deeply impressed by the way their status, carriage and style made an impact on the crowd around them.  Harnessing that spotlight for the good of the community seemed like an fantastic mission, and I pressed Victoria to tell me more.  She invited me to perform with her that summer on Fire Island as part of her “Out of the Mouths of Live Babes” series at the Ice Palace, and I travelled to Cherry Grove for the first time to do a show with La Diva, Jacqueline Jonee, Rose Levine  and others that I would come to know later.  Fortunately, the Court has always had a kind spirit toward young members, and I was mentored and mothered after my first performance on the Island. I learned that no twenty-three year old should be singing “The Ladies Who Lunch.”  Note taken.  I joined the Court family in September of 1997 with a wonderful drag mother in Victoria, and began mixing my passion for performing with my desire to be part of something greater.  How was I to know how amazing my experience would become?

The Experience to Lead.

I believe that I am well suited to serve as Empress of New York.   I have served two terms on the Board of Directors of ICNY, once as its Secretary.  I am just about to finish my second term as Minister of Protocol, and am well known and respected in that capacity around the Imperial Court System.  I have attended out of town Coronations in Kentucky, Connecticut, Rhode Island and Buffalo, and have been given family titles in three of those four Courts, in addition to Massachusetts and Toronto.  I served on the Board of the New York City Gay Men’s Chorus for three years, and in 2002 was crowned Her Royal Majesty, Queen of the NYC Gay Men’s Chorus.  If elected, I would be the first person to have served in both of those capacities. 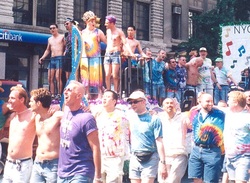 2003
In my year as Queen of the Chorus, I reigned during a time of transition and change in leadership.  It was challenging to act as cheerleader to a group of 250 men from different backgrounds with differing needs, but my “Butch” and I managed to have a very successful year!  In addition to planning the annual No-Talent Show (a thirty number marathon!), after-concert parties and membership events, we also instituted several social outings and were the first reign to have an active table presence at the Broadway Cares/Equity Fights AIDS Flea Market.  Additionally, we arranged for one of Manhattan’s numerous street fairs to benefit the Chorus and had a table at that event, including a performance space where we performed on 7th Avenue throughout the day.  Our crowning achievement was at the Heritage of Pride Parade where we led the largest NYCGMC contingent in its history on a float celebrating “Peace through Pride” – our float and marching contingent sang all the way down the route and were rewarded with the “Best Use of Theme” award that year. 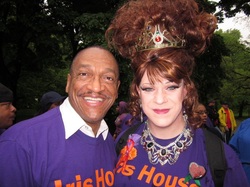 2011
As an activist, I have marched on Washington twice, participated in rallies at New York City Hall, attended City Council hearings, demonstrated at the United Nations, attended political candidate rallies and fought for our rights.  While in college I chaired our LGBT student group and led a contingent to the North East Gay Lesbian and Bisexual Student Association Conference in 1992.  I served as a board member of the Gay Activists Alliance of Morris County (NJ) for two years, and it was during that time that Witti Repartee was christened.

I am currently the Director of Development at Iris House, an organization founded to serve women infected with and affected by HIV/AIDS.  I have been a fundraiser and “Chief Story Telling Officer” for nearly a decade, and since 2001, I have been responsible for raising more than $6,000,000 in funds for arts, education and social service organizations.  I was part of the strategy team behind ICNY’s Trinity Place Shelter project; reinvented our electronic communications with “The Herald’s Report;” written for the International Court Communique; and redesigned and rewrote the Court’s own informational brochure in 1998.  (I am honored that some of my copy still exists in our trifold today!)  We’ve come a long way since then, but from my earliest days in ICNY when Panzi and Bill named me Press Secretary to the Emerald Empire, I’ve been involved in telling our story to a broader audience in print, electronically and from the stage. 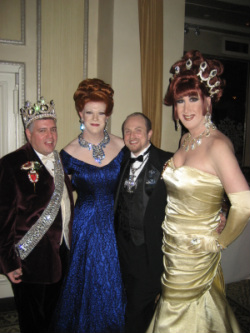 2010
Late in 2008, I bumped into Tony Monteleone who told me that he and Anne Tique were about to step up again for a second reign.  He encouraged me to come to the Twelve Drags of Christmas.  Having been away from ICNY for a few years, I was a little nervous about walking back into that room:  I hadn't taken a hiatus out of anger, or left on bad terms, but I had stepped back and then away for a while.  How would people react to my return?  That night at Pieces, I was astonished.  I was greeted with open arms, hearty hellos and a chorus of "Witti! Are you coming back?"  I hadn't expected that reaction, and was overwhelmed by the sense of family that came rushing back to me.  That is what the members of the Imperial Court of New York are to me:  family.  If elected, I will have a difficult time naming an "imperial family" because I already feel like so many of the members are "my family."  Some have mothered and nurtured, some have been almost paternal.  I've even grown to appreciate the crazy aunts and goofy uncles, because we're all family.  We come together to celebrate our culture, to play this great game, to raise money for amazing causes, but we also come together because family always does.  New York is unique -- we may not always love each other, but family sticks together and we defend our own, put on a great show and get busy with the work at hand.

People have asked me “When is Witti going to be Empress?” and my response has been, “I will be Empress when and if the membership of ICNY tells me THAT is the way I can best serve them and our community.”   That was my answer to someone ten years ago, when I wasn't ready for it.  However, I feel that now is the time that my skills and experiences can be called into play, and with the encouragement I have received from the membership, I put forth my application and would be honored to serve our court and our great city as Empress XXVI.